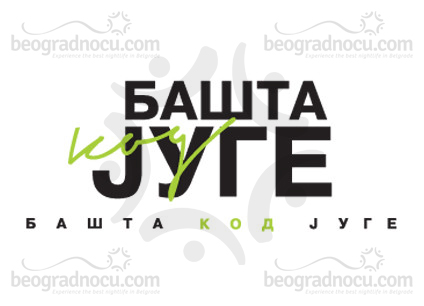 Bašta kod Juge Bar  is a new place in town. Bašta kod Juge is located at Zemunski kej, on Hotel Yugoslavia platou, faced towards the river, nearby the Grand Casino’s entrance.

There is a stage in open, modern Bašta kod Juge’s garden-terrace, where are organized famous music bands’ mini-concerts. For instance, for the opening day, we organized a concert of a Neverne Bebe band.

Bašta kod Juge is opened every day during a daytime as a cafe, bar and restaurant, whileas during the night, starting from 9 p.m., it becomes a nightclub, which is opened up until 1 a.m.

Bašta kod Juge has a capacity of 1000 guests, which makes it the biggest garden-terrace in Belgrade. It has a modern interior, with vivid colours complemented with the greens, which offers you a real enjoyment oasis during the hot summer days, during day and night time.

The grand opening was visited by many celebrities. Among others, there were Miodrag Kostić, željko Mitrović, Slobodan Homen, Marina Visković, Davor Jovanović, so as basketball plazers Ivan Paunić, Nemanja Nedović, and many others.

Right next to the Bašta kod Juge Bar is a parking space of a big capacity, which can accommodate all the cars from the visitors of this ‘place to be’.